Who’s bright idea was this? 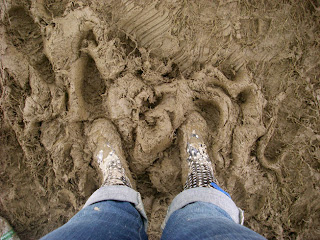 An outdoor festival in Ireland???

Wahoo, yesterday Martina and I headed out to Punchestown in Kildare for the Oxegen 2007 music festival. The festival was two days but we got day tickets for Sunday only. Upon arrival we were 100% satisfied with our decision to buy wellies, due to the fact that we have been receiving more rain this summer than ever before (yes even for ireland). By the end of the day mud people were abundant and mud wrestling was the main event, set to the tune of some of the most popular bands around.

Our day started out by catching a bit of Charlotte Hatherley (of ASH), nice and rocky. We then sloshed over to the Green Room to watch Calvin Harris, great energy, horrible lyrics. It was pretty exciting when the top of the tent burst during his set. Lunchtime! We ate the best felafel’s I think I’ve ever had listening to the rhythm of the Sierra Leone’s Refugee All Stars.

Now, the fun begins. Bloc Party took the main stage, and put on an good show. We cut it short though and headed over to catch Albert Hammond Jr, but got there just as they were clearing the stage. Which is okay because we’re going to see him at Vicar Street Next month. Now it was time for Martina and I to go our separate ways, she headed over to Black Rebel Motorcycle Club and me to CSS. Due to a certain Amy Winehouse cancelling her set (ahg that woman, i tell ya always messin things up) I missed half of CSS because they were moved up in the schedule. But I was able to catch the last half, which was absolutely amazing, as expected. The good thing about the time change was I was able to catch the majority of the Black Rebel Motorcycle Club set with Martina, and found a few other friends there too.

We stuck around at that tent for the next band, Satellite Party. I’m not quite sure why they changed their name from Jane’s Addiction though, all they played were Jane’s Addiction songs. Wow is Perry Farrell crazy. Then across the way to see the fabulous Arcade Fire. Once again we cut the set short and slugged over to watch bright eyes. Now i was just expecting same ol thing, but, they blew us away! Without a doubt one of the highlights of the festival, I think I finally made Martina a fan also. She finally figured out “what all the fuss was about.” We stayed in the same tent for the fabulous (tosses hand) Rufus Wainwright.

The end was near, the sun was going down and the Killers were on, but Daft Punk was louder. We stood half way between the two turning an ear to each. We also ducked into the Pet Sounds stage to catch a song from Brian Wilson, gotta say, a middle aged man sitting down playing a keyboard just wasn’t holding a light to the lasers and light shows Daft Punk was putting on. We ended the nite with All These Things That I’ve Done by the Killers. Overall the last hour was filled with dancing to daft punk, singing along to the killers, and feeling sorry for Brian Wilson being overshadowed by the other two.

The nite was almost over. The heard of mudcaked people headed towards their cars, campsites and us to our bus. We ended the nite, in the standard Martina/Judy way, by getting separated. I squeezed onto a bus and the doors closed before Martina got on. We thought I was the lucky one but getting on a bus first thing, but it turned out Martina was the lucky one. About 10 down the road, my bus got a flat tire! Now we had 50 muddy, exhausted, drunk people waiting a half an hour for another bus to pick us up.

I finally got to the door and peeled off my wellies around 2am. Wow what a day.

Some mud pictures, this was not just a certain area, this is how the ENTIRE festival grounds looked: 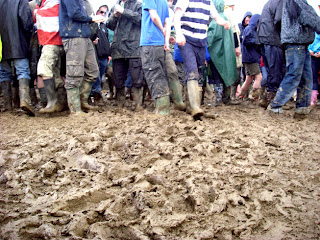 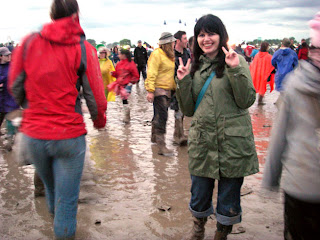