When we arrived at the dock at Ko Jum, there were a few taxi’s (think motorcycle with sidecar) waiting. We had asked the woman at Oasis tours if we needed a booking and she said we didn’t, and to ask the captain of the boat when we arrived, as much as we didn’t like this situation from previous experience on Koh Lanta we reluctantly agreed. So after all the other tourists had hopped in taxi’s and left for their designated hotel, we hovered around waiting to talk to the captain. He asked us how much we wanted to pay and then made a few phone calls. Soon a taxi came to pick us up. Not too far from the port we arrived at a small hotel which a large reception counter. We asked if we could see the room first, they took us across the street (away from the beach) and showed us a newly built bungalow nestled in a chain of identical bungalows, 800bt a night. While it was nice and modern, we had our hearts set on staying near the beach. We told them we were going to check out a few other places but might be back later.

We heaved our bags over our shoulders and headed down the dusty road, after a 10 min walk we saw some bungalow’s on the beach side, we stopped in and asked if they’d any availability. They did not, they were fully booked. A wave of panic rushed over both of us, completely fearful that we’d be in the same situation we were in Koh Lanta. However, when I asked the woman if she knew anywhere beachside with availability, she told me to wait and got on the phone. She came back out and told us to wait there and a taxi would come, she found a place for 500bt a night and on the beac… okay. So we waited, and waited, and waited. 30 min went by and the woman came back to us, she could tell we were wary of the situation, she just said “don’t worry it will be okay!” and showed us a laminated print out of our destination. Then a taxi came but the woman informed us, this wasn’t our taxi. The driver got out, came over and sat near us and started chatting away.

Another 30 min went by and a man on a moped pulled up, he shouted up at us, that one of us could go with him to have a look at the room while the other stayed, if we liked it he’d send his taxi to pick up the other and our bags. As i’ve more experience on the back of a bike than Rebecca (she has none) it was up to me. The man introduced himself as Maat. I jumped on the back of the bike, waved goodbye to Rebecca and off we went. About 1km down the road, the asphalt disappeared and we were on a dirt road which quickly deteriorated even further until we were driving on what appeared to be a dried up river bed. I’ve no idea how he dove up such steep rocky hill, more suited for a mountain goat than a motorcycle, with me on the back of the bike.

Along the way Maat told me how he use to work at a 5-star resort but wanted his own place, which he’d just opened up 4 months ago. He also informed me that he built bungalows so far away, so once his customers were there they couldn’t leave… he joked. But really once they got there they didn’t want to leave. About 20min later he stopped the bike and motioned for me to follow him down a narrow trail into the jungle. That sounds safe right? I could see the peaks of bungalows on a steep hillside so I figured it would be okay. First he introduced me to his wife (always a good sign), then showed me the restaurant, the beach and which bungalow we’d be staying in. It was all simply beautiful, exactly what we’d been looking for, right on the beach, brightly coloured hammocks swinging from the trees, a restaurant/bar (with what we would learn to have the best cook on the island), a bamboo bungalow with an outdoor shower, all nestled in the jungle with monkey’s in the trees. Maat asked if I was happy and if he should send for Rebecca, I beamed with happiness and said it was perfect. 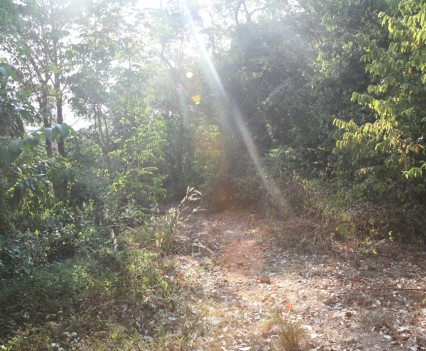 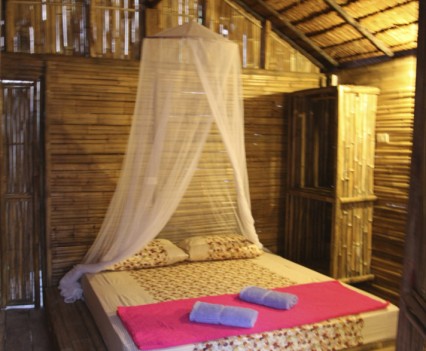 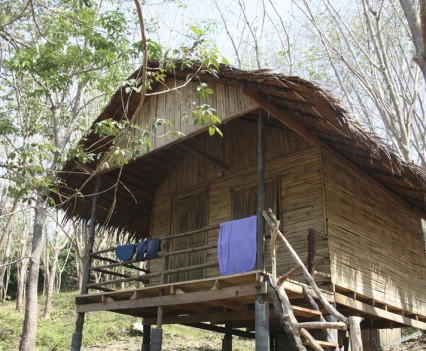 I headed down the bar and grabbed myself a large Singha beer and waited patiently. I was so delighted, I walked around the place and checked out the beach, the returned to finish my beer on the steps of our bungalow and wait for Rebecca. About an hour later my beer was gone and Rebecca appeared through the Jungle with Um (Maat’s staff) carrying my bag. I was so giddy at this point and Rebecca looked exhausted and a little confused. It sound as though she had a more interesting trip that I had. While waiting for me the taxi man, who we met earlier, had been busy hitting on he and buying her drinks (she only accepted water!) Um arrived to pick her and our bags up in a motorcycle with a sidecar. But the weight was too much for the bike on the steep hills and Rebecca had to get off and help push! But of course when she finally arrived and saw the place she was as delighted as I was.

We threw on our swimsuits and headed to the beach, past a makeshift sign that said The Last Fisher, for an evening dip while watching the sunset. By the dawn light we scoured the deserted beach for shells, meeting a lovely Scandiavian woman from a resort down the beach. We talked to her for a little while, she showed us the shell treasures she had found. We learned that she had been in a deep depression and her friend had ‘made’ her take this trip. She was happy while she while she told us her story. She then gave us one of her prized shells and headed on her way. We loved her. 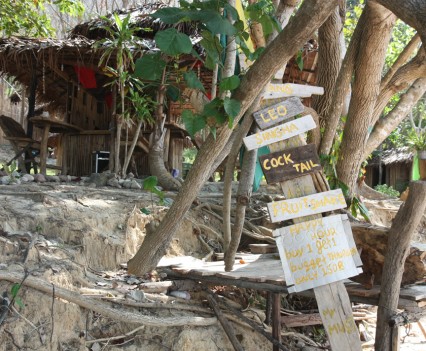 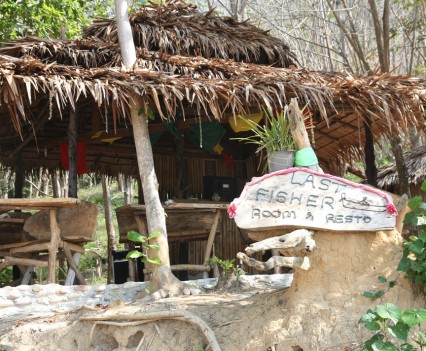 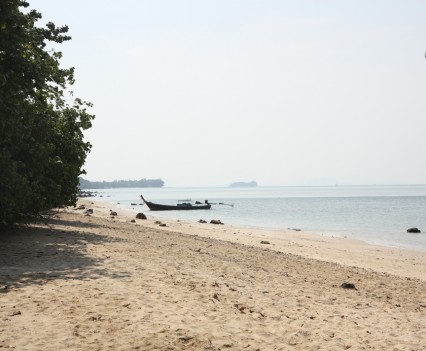 Dinner time! We headed back to The Last Fisher for beers and grub. Maat’s wife did the cooking and there was an extensive menu. I had the shrimp green curry and Rebecca when for Cashew Beef, both delicious. In the evening we joined the others at the bar for a few more beers, a polish couple from down the beach for “the best food on the island” and a Neils from Germany who was staying at the Last Fisher.

After removing a giant centipede from our bathroom, we washed the dust off and headed to bed. However I was soon awaked to the sound of monkey’s scampering across the palm thatched roof. The noise was so close, and being startled from my sleep, I thought they were actually IN the room! I switched on the light but all was secure. Back to bed and looking forward to the quiet Island life  again.