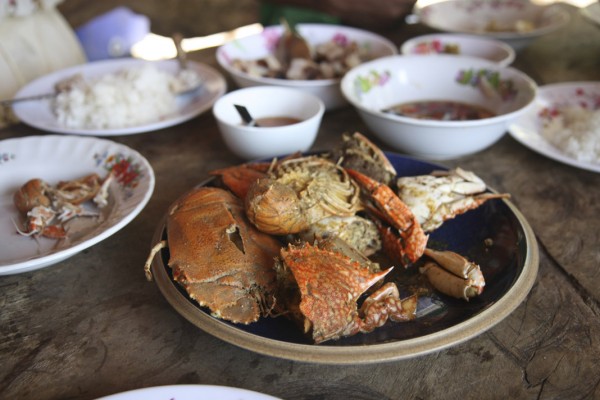 After our exhausting day yesterday I managed to sleep until 10am. Rebecca was already up and was just getting back from the beach where I joined her for an omelette and coffee. Shortly after I finished my breakfast, Maat asked us if we wanted to join him and his family for Lunch. How could we refuse?  However I didn’t realise the time and lunch was about to start! Still full from my omelette, I tucked into the freshly caught crab and other ‘mystery’ seafood, with chill sauce and rice. The crab was delicious,  but I wasn’t sure of the other, something that resembled mushrooms perhaps sea cucumber? Either way it was disgusting and nearly ruined the rest of my meal. More crab was the trick.

After lunch we decided to head to Paradise Beach, which is only accessible during low-tide as a jetty of rocks separated their beach and ours. After 40 minutes crawling over the hot rocks with the sun beating down on us we found a long sandy stretch of beach with a few resorts hidden in the junglenext to it. We stopped into the first resort we saw and ordered two mango smoothies the resort alsolet us borrow a few snorkels so we could have a look around in the crystal clear water, however she warned us that it was a bad time as the tide was coming back in. 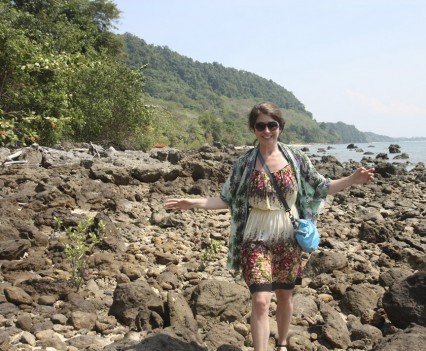 over the rocks we go 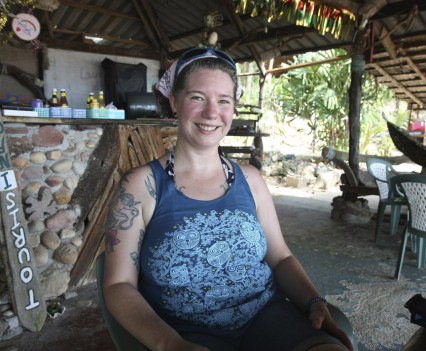 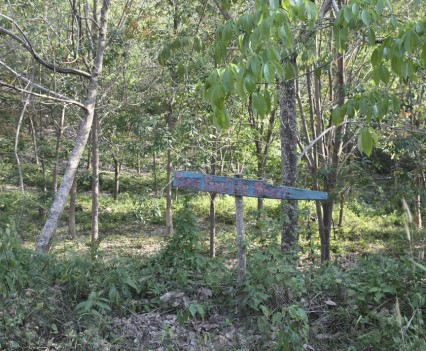 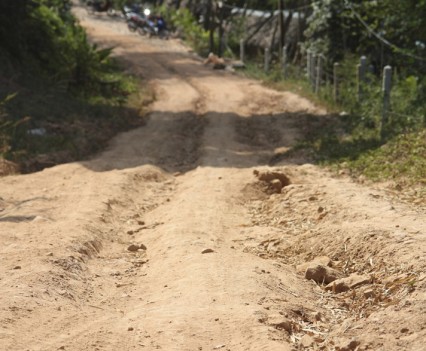 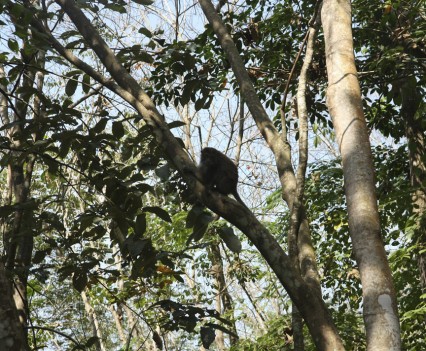 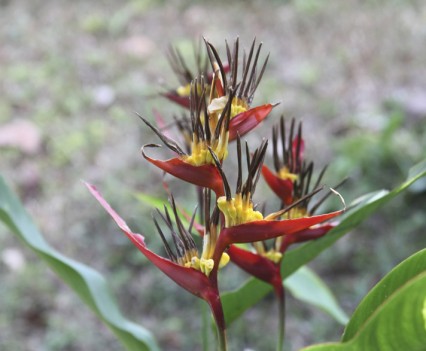 Birds of paradise in paradise

On our across the beach way we met up with the Polish couple, from the night before,  who just returned from snorkelling and pointed us in the direction were we might find “some” fish. The girl also loaned me her flippers to make the swim a bit easier. We waded into the water and began our search. But straight away we had issues, the masks we borrowed were old and very used, they weren’t airtight and water would seep in after only a few seconds underwater. I think mine was slightly better than Rebecca’s so she decided she’d go have a rest on the beach instead. I continued to snorkel for around a half an you, I saw a few fish, but mainly looked for shells and other treasures in the shallows.

When we’d had enough of the sun and snorkelling we decided we’d better head back. Of course thetide had come in by now so the way we came was blocked. So on we went into the jungle to find the dirt road back. The road was very dusty and rocky, much like a dried up riverbed. It was still hot, but we managed to find our way back without any trouble – I think there is only one main road on the island. We saw lots of monkey’s on the way back but kept our distance.

Once we washed the dirt from the road and the salt from our hair off we headed to the resort next door for to enjoy the luxury of the internet. We also enjoyed a few cocktails while we watched the sun sink into the sea – one of the best sunsets yet. In the glow of the fading light we walked the beach back to the Last Fisher for dinner. I had Pad See Ew and Rebecca had a shredded shrimp salad that was burn your mouth off spicy! I was delighted to finally get some spice! We followed dinner up with a dessert of banana’s boiled in coconut milk, so simple, yet so delicious. We then played short game of jenga and visited with others at the restaurant.

We ended the evening with some rum and pineapple juice while stargazing from the beach. Paradise. 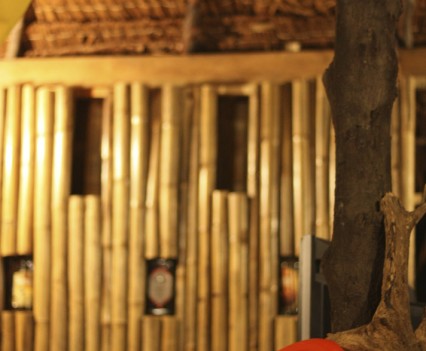 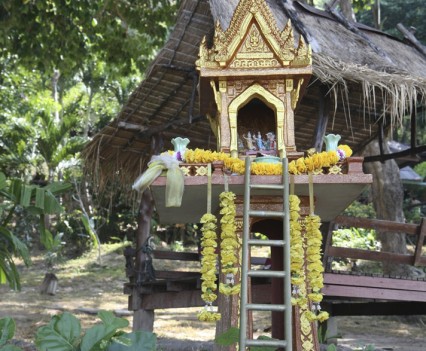 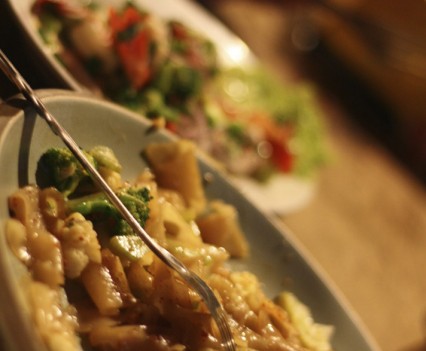 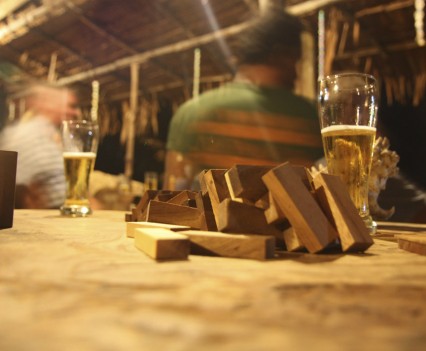 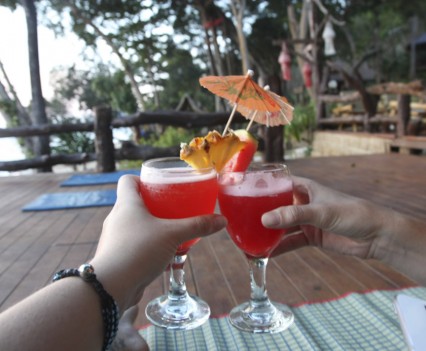 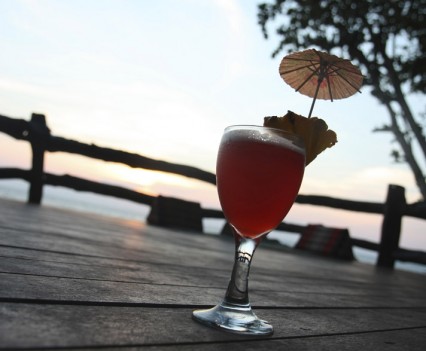 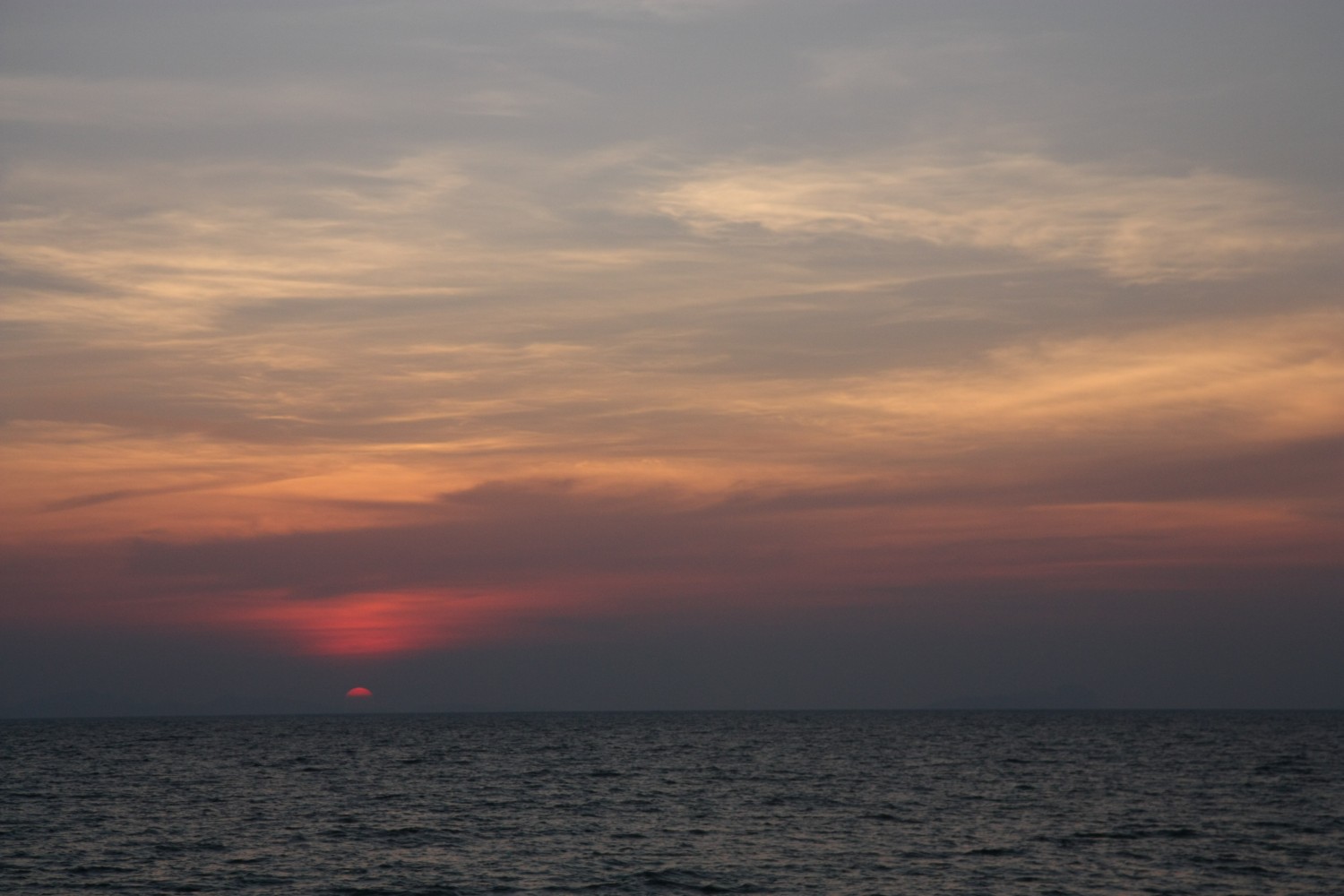