On Thursday 10 of us headed west to Carrick-on-Shannon for the annual Shannon Cruise. Thursday night was nice and easy, we settled in for the evening and to enjoy a bbq on the docks. Friday was back to the river going at a top speed of 8mph! We stopped along the way for a quick dip in the cool (freezing) waters of the Shannon. There was only one fatality of Mick’s new waterproof camera, which is probably still working perfectly at the bottom of the river. We sailed on and went to a pub beside the river for dinner, I had grilled Hake, which has topped my list of the best dinners I’ve ever had in Ireland. Back to the boat for some cards and drinking. 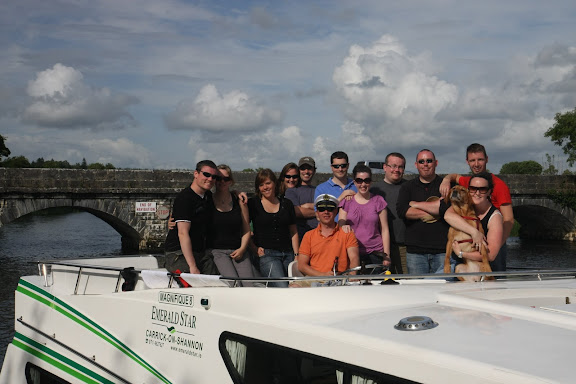 Saturday contained more of the same intermixed with shooting scenes for “The Shannon Stranger II a sequel for the members of the Shannon Cruise from years back. We also had an important addition to the crew this year, Holly, the official boat-dog joined us. It was great having a dog aboard. On Sunday we lazily made our way back to Carrick-on-Shannon to head home. We had a farewell dinner at a local Italian restaurant and then I hopped on the back of Mick’s bike and we were once again Dublin-bound.

And that’s when thing’s went bad. About 30 minutes into the bike ride my stomach started to feel queezy this was then followed by what mick could only explain as exorcist-style shenanigans including the worst stomach cramps I’ve ever felt (and never want to feel again). Long story short, at 2am we went to the emergency hospital where I remained until 2pm the next day. When I left they still didn’t know what was wrong with me. I’m awaiting some more tests to come back from the labs. I’ll then get antibiotics for whatever ails me. Most symptoms are pointing towards E.Coli which I could have got from something I ate over the last week or so. No one else from the boat trip has been sick so we’re ruling out anything eaten then. I’m feeling much better today (Tuesday) and was able to eat almost a full dinner. I’ll hopefully get lab results back tomorrow. In the meantime I’m confined from going to work as I may be contagious. All I know is that I feel better and it seems that whatever it was has passed. thank god!